interesting things to learn about words 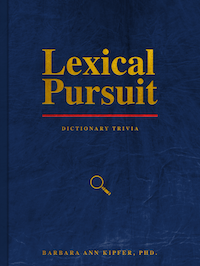 buy the book! Interesting Things to Learn About Words is a collection of a-really-interesting-thing-you-probably-do-not-know about 20,000 words and phrases. The tidbits include word history and etymology, unusual or lost or uncommon words, grammar instruction and usage, word trivia, differences between confusable words, and how words are formed.